These are four one-screen puzzles that shouldn't exist. But do. I think they make interesting puzzles, but the mechanics they rely on might be too obscure.


I recommend attempting to solve them in order. This is the place to come to in case you are really curious about how to solve them. If you want to read more about one-screen puzzles (actually puzzle levels in general) I have a whole post about them and I am kinda explaining the levels in this post using that framework I explained there. The following paragraphs contain spoilers. If you needed to read spoilers for one puzzle, try to still solve the later puzzle(s) on your own. It might be fun/frustrating, I hope. 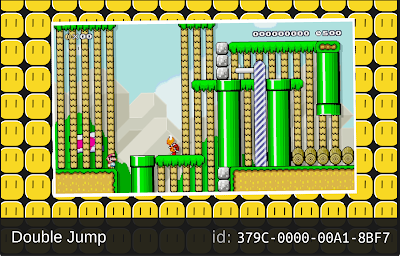 This one is the easiest puzzle I could come up to that makes use of the mechanic I wanted to highlight here.

Contradiction: You need to stomp on the Koopa to climb to the top so you can then get to the right. But then you will find yourself unable to jump to the exit. So I guess you could instead take the Koopa's shell with you, but you can't take the shell with you because you need to jump.

It seems that experienced players fall into thinking that they need to use a shell jump glitch  to solve this level, but I intended something far simpler.

Mechanic: The mechanic tying all these puzzles together is that in Super Mario World, stomping on a koopa makes the Koopa leave their shell. It looks like those shell-less koopas are called "Beach Koopa".

Implementation: In this situation you need to take advantage of the poor beach Koopa. Stomp on the Koopa to make them leave the shell. But to make it so it's hard to do this accidentally, I made it so it is kind of unlikely the beach koopa will drop in the right location unless you do it intentionally. Wait for the Koopa to stand up and then grab the shell and stomp on the Koopa again so you can reach the top holding the Shell. The last jump might be tricky to some people. The easiest way is to drop the shell and spin jump on it. I guess you can also kick the shell and stomp on it at the right moment, but that's a life-threatening stunt. 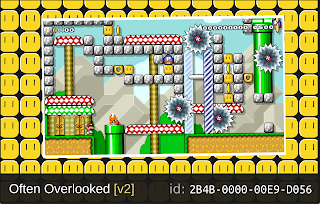 Hehe, I didn't notice that I took the screenshot with the comments on.

Contradiction: Like in the previous level, you can use the often overlooked Beach Koopa and the shell separately. First you use a similar trick to be able to grab the P switch (you need to kick the shell towards the yellow block below the P-switch). You will also need the trick to reach the top. Once you reach the right side you will find yourself on a strange situation. You need to press the P switches spawned by the pipe 3 times, but even if you are lucky and a Beach koopa is available to climb, you can only do it one time. What's up with that?

Hint / Diversion: The first p switch exists really as a distraction. Or maybe so that it's necessary to know that you can stomp on Beach Koopas before continuing. At the top there is a yellow block next to a coin. It's there to explain that to go through this you need to press the P switch and then wait until its music ends. Also this time it is easy and likely that a red Beach Koopa will fall towards the saws' area so that you hopefully can see that you can use this koopa to make the jump towards the yellow blocks.

Mechanic: This is where the saga turns obscure. The trick in this level is how SMW red koopas work when put inside pipes. Generally, the red koopa won't respawn unless they leave the screen or get killed. In SMW's case, what matters for the respawn condition is just the shell. As long as the shell leaves the screen, the red koopa respawns. Even if the Beach Koopa is still available. So by stomping on the red koopas and throwing the shell outside but leaving the beach koopa alive, you can make the tube create an indefinite number of beach koopas.

Implementation: Stomp on the red koopa in such a way that the Beach Koopa is thrown to the saws area. Clone the koopas and Do this 3 or 4 times. Having 3 koopas might be a bit risky because a mistake while using the P switches will force you to restart. Having 5 or more beach koopas is risky because it might be too crowded and they can still kill you.

Update: I fixed an unwanted alternate solution (cheese), it's possible to jump on a P switch in mid-air. So I had to change it so it is not possible (I hope) to move the pipe-create P-switches at all. Also added a reset door and some other minor changes. 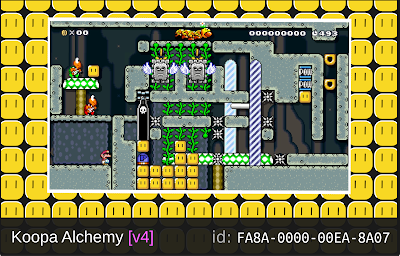 If you thought the last one required too much an obscure knowledge to work, that's because you didn't see this one yet. This level is terrible!

Also this level really had so much cheese possibilities, there's a reason it's in version 3 four right now. I really hope it doesn't have more ways to cheese it without using the intended mechanic, but I can't make guarantees. Maybe you can find more ways.

Examples of cheese in previous versions:

Contradiction: You need the Pows and the only way to acquire them is (I hope) by pressing the P switch. In order to do it you forcefully (I hope) lose the two shells, one is needed to kill the wiggler and there should be no way to do it without losing a shell. The other is needed to make the Bill blaster drop on the P-switch. So in order to take the Pows to the Thomps , you will need to stomp on the beach koopas. But unfortunately, one of the beach koopas is red, so they won't drop to the ground. And you need (I hope) to stomp on two beach koopas to be able to take the two pows with you.

The Mechanic: So what we need is two green beach koopas, but we only have a green one and a red one. Just change the red one's color! Stomp on the two koopas and make it so the red beach koopa enters the green shell. This turns the koopa's shoes green! Really.

Implementation: You need to be careful in stomping the koopas to change their color, it's too easy to kill something you don't want to kill. 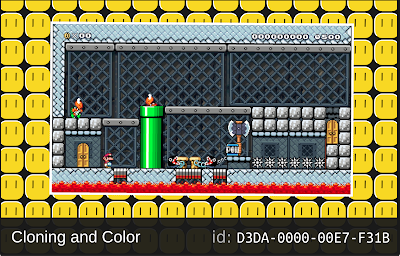 This one is really the combination of the two last ones. You'll need to combine both techniques to cross that spike area.

Contradiction: The only way (I hope) to cross above those spikes and reach the axe is by leaving the area with green beach koopas. But there's only one of them and in a completely wrong location.

Mechanic: Just clone some six or so red beach koopas and use the green shell to turn them green.

Implementation: Easier said than done, a bad stomp might make you lose the green shell, or kill all the green beach koopa you've been creating. But I was nice this time and added a door that allows you to reset the whole deal without losing a life. I should really try to use these doors more often in one-screen puzzles. An issue is that they might have unintended consequences. For example, a previous version of "Koopa Alchemy" had a reset door, but it was possible to exploit it to change the position of a pow block and then you can use the green koopa to get the other pow block.