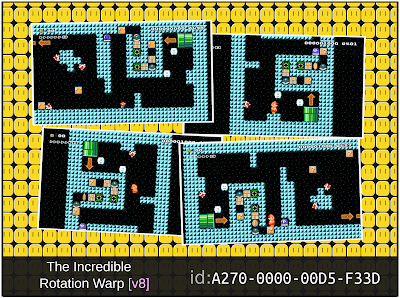 A month ago I had what I thought was a cool, original idea. There were already many levels based around flipping the screen vertically / horizontally. Really "all" you need to do is make a warp zone that's identical to the main zone but with everything flipped. The next logical step was think of rotation instead of just flipping.  With there being four different versions of the same world, each being equal to the previous one rotated 90 degrees right. How was I going to implement it? My idea was quite clear:

So I just needed two things, the room with that pipe that rotates everything and the room with the puzzle. In reality I would need to make 4 versions of each room. The first step was to see if the rotating room is possible at all. You see, let's name the rooms for each diection A (up), B (right), C (left) and D (down). I wanted the same pipe to take you from A to B, from B to C, from C to D and from D to A.

You can place pipes on top of other pipes, even warp pipes. This seems to be an intentional move by nintendo because with this it is easy to make a situation in which entering any of two (or more) pipes takes you to the same exit pipe. Thanks to a reddit thread I found out that it works in reverse as well: If you enter a pipe that has multiple entry points, it will always pick one of them. Priority depends on the order the pipes were placed in the map. Latter tubes have more priority. So I was just adding pipes trying to keep the correct priority going and correcting when it's wrong. After half an hour, it started to seem impossible. Because it is impossible.

The only way to fix it was to remove the cycle somehow, but I didn't want to change the original idea of having a single tube to rotate it all. Then I had a an idea: There's a room in which the pipe would appear top. We can make it so high that you cannot jump through any normal means, and need a spring. So add a whole new pipe that can only be used in the (up) room and takes you to a room that it includes a spring. When you exit this spring room, you are actually taken to a different (but identical-looking) version of (up): (up'). 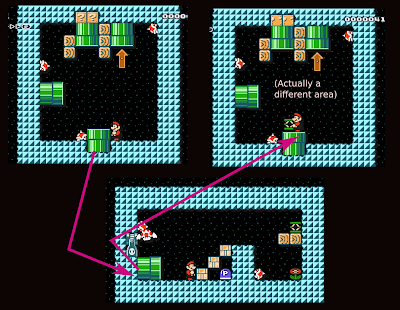 So now there is an up area A, and another up area A', an spring area called E. We have pipes like A'-B, B-C, C-D, D-A, A-E, A'-E, and there's no cycle. There's a bit of a problem and it is that now there's a whole new room to complicate the original idea, and worse, you need to go through it every time you want to change the gravity direction once you are top.

But at least the rotation was working, I was truly excited and proceeded to think of the puzzle. It would have three version: Up, Down and Left. It makes sense that Left is the one that takes you to the exit.

Spoilers (Although this is an old version, the new version has a different puzzle area but the idea is roughly the same).

I was quite proud of this, so I published it. I tried to get some plays going, the first versions had too low success rates and many crosses in the rotating area, so I reduced the number of enemies. These are screenshots of the fourth edition, things like there being 4 question blocks instead of just one came from attempts to make the level more friendly.

I published it to /r/MarioMaker.  I tried to get streamers to play it. I passed it around a bit. I thought this idea was very original and that people would love it. The results, however, were ... underwhelming. 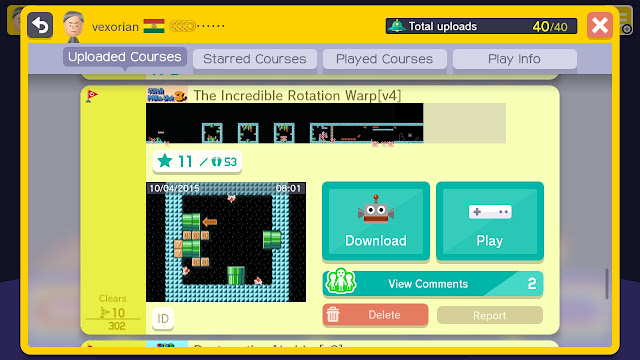 To be fair, 11 stars is not that bad. Most of my levels stay in one-digit star amounts. But as the time passed I found multiple people who implemented the rotation idea in more successful ways: Like /u/saintlantis and /u/GamingfulLuke . Their levels got like hundreds of stars. I can only dream of ever making such a good level. But what I take from all of this is that this old "Rotation Warp" idea needed more work. In Level design, it's not enough to have a nice idea and know how to implement it.

Where to start in updating this level? By coincidence I saw the same streamers (supertwou) play both my level and saintlantis'. The biggest impression I could get was that it was far easier to tell that their level is about rotation. It helps that the rotation does not only happen in a small room, it's clearer that all of the map rotates. I cannot really change the idea of the level too much (Or I would be making a whole new level instead of modifying it), I still need to keep a single room for rotation. But I can still improve the situation a bit.

This is the new rotation room. I hope the extra asymmetry can help. 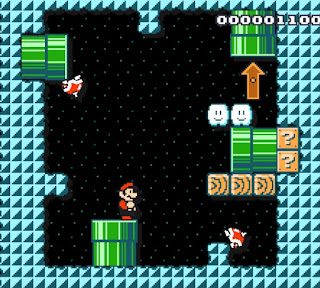 I also further reduced the number of enemies, only two of them now. Let the difficulty come from noticing that the thing rotates.

Another very subtle thing is that the arrows in the rotation room pointed to the opposite direction than their respective puzzle rooms. I fixed this :)

I changed the special effect that plays whenever you use the rotation pipe. I used to use the telephone effect, but it shows graphics in random places of the string. Instead the Car Horn effect shows a flower circle in the pipe.

I also made plenty of changes to the puzzle area:

I added an arrow right next to the pipe. This should help notice that direction is important. The actual puzzle area looks very different too. Spoiler: I don't want to spoil things too much but here are some details:

Thanks for reading (I'd be really surprised if anyone actually found this interesting). I hope the new version works out!