Levels featuring puzzles in a single screen were not a novelty, but what was and what made this level worthy of that name that implies it's THE One-screen level was that the solution was very interesting definitely not trivial and you could spend an hour trying to solve this level. It got quite a bunch of stars and a place in the elusive top 100. It made the genre rise in popularity and Seth made other 4 such puzzles since then.

As a fan of puzzle games I couldn't help but try my own take on these levels. 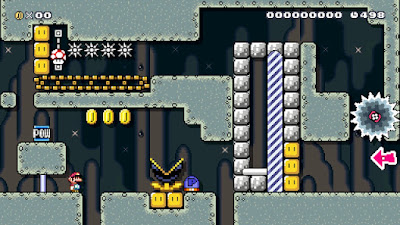 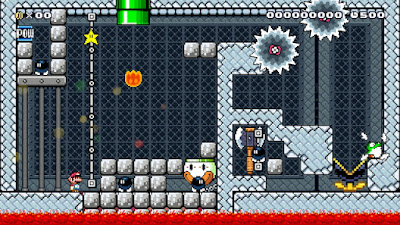 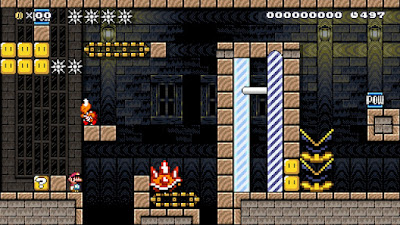 I may have spent a good amount of free time making levels for a puzzle game to be left unnamed for now. When I think of puzzles there are some things to find interesting. Light spoilers for Seth Bling's puzzle :
If you want to try my puzzles on your own (pleeaaaase someone play my levels!) you should stop reading as I am about to spoil them big time.


Pow It is in my opinion the easiest of the bunch. The mechanic it centers around is very simple: The Pow block makes coins fall down, this includes blocks that turned into coins because of the P switch. Big deal huh? Well you see, the contradiction is that if you don't know this there are many ways in which you'll get trapped. 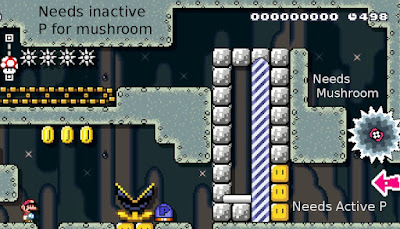 The main diversion exists as the Muncher next to the P switch. Your first reflex will be to use the Pow to kill it so you can grab the P switch. 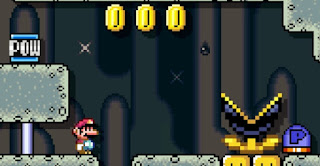 But doing means you failed the puzzle, remember the intended solution is to use the Pow while the P is active. It's not all that bad though, because using the Pow this way makes the Hint happen; The 3 coins will fall, reminding you that Pow makes coins drop.

How can this be solved? It's my least favorite part of the puzzle. I mentioned how I don't like tricky implementation, but it turns out it might be needed to be able to correctly disguise the solution. In Seth Bling's level, it's hard to make the caparace stop so you can use it again. This makes thinking of using the caparace that way less trivial. In Pow It, it appears you need to kill the Muncher to get the P switch, but it isn't exactly so... 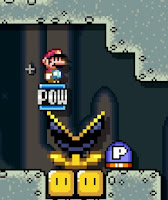 If you somehow gently drop the Pow above the Muncher you can walk on it then with some luck you can jump and fall on the P switch. This makes the Muncher drop in height a bit allowing you to take back the pow (be careful).

I think this part of the level may have creeped a bit over what I originally intended. Are players even supposed to know how to drop the pow without activating it? That you can use it to walk on top of harmful areas?

I may do something like update the level so the pow starts on a Muncher and you can walk on it at first. Better hints or it makes it too obvious?

Living Fire is my favorite of the bunch because the solution is very unique. It begins with a hint: Fire balls can make bob-ombs explode. Right then it shows you a diversion, you need to rush to use a bob-omb to rescue the clown car. You certainly will need the clown car to reach the other side of the level. 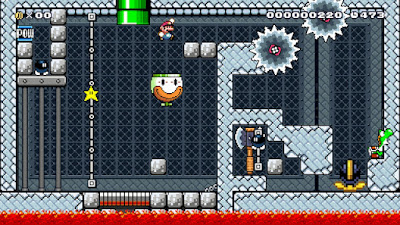 That's when the troubles begin. You need to make the two other bob-ombs explode. But the fire can't be moved. There's a yoshi which can eat fire and then use it to throw 3 fireballs, but Yoshi is on a side of the level too far from the fire that falls from the pipe (contradiction).

The mechanic is actually funny: If you live the clown car right below the pipe, the fire ball will take control over the clown car. Did you notice they have eyes? Turns out these fireballs are alive! 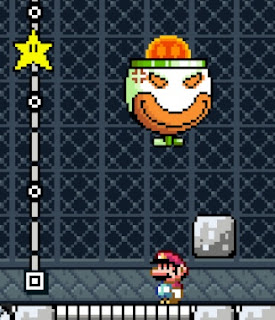 Once possessed, the clown car will move towards Mario but is mostly harmless (unless you touch the fire "brain") you can jump to push the clown places. A good place is the bob-omb on the top. So that was the real use of the starman , you didn't only need it to go through the saws but also to kill the fireball and take back control of the clown car.

It's unfortunate that there are no hints that this is even possible. My big hope is that while trying to do things and jumping around it happens naturally that the fire ball possesses the clown by accident. Then they can turn that into a solution.

This doesn't solve how to explode the other bob-omb and what Yoshi's role is in all this, but I think that's enough spoilers.

There's one key mechanic / puzzle to solve in this level and it is that conveyor belts allow Caped Mario / Tanoki Mario to gain momentum in a small space. To divert away from this, I put the giant spiny on top of the conveyor belt, making it seem like the belt is there just to keep the spiny in place. The koopa then needs to be used in two situations: One is free get the leaf from the question block. But we also need to kill the spiny. There are two ways to do this, both require you to really know how to throw shells. 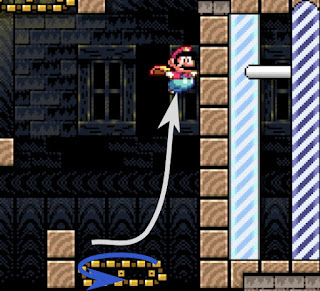 That secures one pow. The rest of the level is about using the other traits of the cape and this extra pow to get the other pow. This one is really implementation-heavy, but I enjoyed the result so I'm sharing it.