So I sent youtuber JSano19, who keeps solving one-screen puzzles my one-screen puzzles. Even though some of them are pretty bad or rely on some obscure Mario World "Features". But it has been fun, plus the videos have quite a bit of views.

First he played Pow It and Living Fire, and he found the intended solutions.


It was going all right until then he tried "Often Overlooked" and "A P-redicament". I talked about "Often Overlooked" in the Beach Koopa Saga post, and he did it mostly as expected, using the pipe to clone the koopas. However, there's a part where you are supposed to use the red shell to jump to the top (Either with a shell jump, or, much easier, by spin jumping on the shell to get height). But what he did was much more clever and... I am pretty sure it's a glitch.

This is so strange and ... changes everything. It's not really a big deal in this level as the spin jump was far simpler, but I wonder how this can affect some other puzzles out there.

This inspired me to make a whole new puzzle. It requires this trick and also some extra knowledge from the Beach Koopa Saga... : BA1E-0000-00EF-245D - Grow your Koopa. 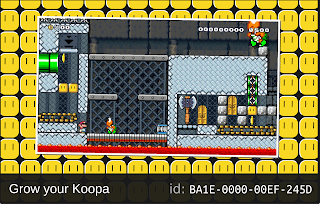 Then he tried "A P-redicament", I never explained how to solve it, but the solution is definitely not to jump from the starting point to the exit -.-

So of course this means I had to update the level to remove that unintended solution. I don't want to exterminate ALL possible unintended solutions. The existence of some of them can improve a level rather than take away from it. And a puzzle with many different solution routes is nice. But when the solution removes the focus away from what I intend, and instead turns the level into a "do this precise jump" instead of a puzzle, I have to fix it. 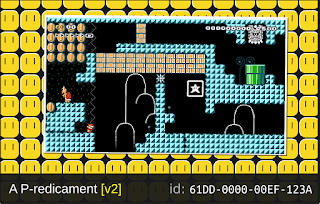